Yellowhammer and Farmland Bird Aid Project Rhayader and district.  A report for the period 2002-2012

First proposed in an RSPB scoping paper circulated within RSPB Cymru in Feb 2002 this community project was launched in 2003.  The project was established and administered by the local RSPB warden up until early Spring 2007 when the RSPB reduced their involvement with the district.  Rhayader by Nature local natural history society then agreed to take the project on and have done so to the present day (2012) albeit as a much reduced scheme than was originally envisaged due to the limits of volunteer time.

At the start, to help establish the scheme Grant aid was received from Environment Wales.  This helped towards the costs of administration, land management and bird food/seed.  Further grants to help with annual costs have been received from the Elan Valley Trust, the British Trust for Conservation Volunteers’ Chestnut Fund and Keep Wales Tidy.  Since 2007 the costs have mainly been met by Rhayader by Nature although much is received by help in kind.

Guided by the original scoping paper the initial planning phase in 2003 identified, alongside the yellowhammer, eight other farmland bird species likely to benefit from the project.  These were reed bunting, house sparrow, tree sparrow, linnet, greenfinch, bullfinch, chaffinch and stock dove.  The scheme sought the co-operation of local inhabitants with an interest in birds, from those that feed birds in their gardens to farmers and other land owners willing to sow plots of bird food crops and carryout other bird friendly management.  An information pack explaining the purpose of the project and the way it would operate, with background information, easy to follow instructions and recording forms and maps, was issued to all those taking part.  Emphasis was placed on the decline of the yellowhammer within the district, something mirrored across much of the UK, and the project’s aim was to see if a small scale scheme could increase the population of yellowhammers, or at least halt further decline, within a circular study area with a 6km radius centred on Rhayader town clock.

Early interest was strong, with 28 active supporters: 20 garden-bird feeding stations and 8 farmer/land owner sown crop plots, some of whom have continued their involvement to the present day.  Eight or so, all garden-bird feeding supporters fell out after the first month or two for various reasons.  An analysis of the target species counts at 12 feeding stations over the first few months of the scheme was made in 2004.  This initial analysis provides some baseline data and identifies many questions about the movement patterns and feeding habits of the species targeted.

By year six a further 3 garden-feeding sites had dropped out but the scheme had gained two new sites.  By year eight (2010) only five garden-bird feeding stations remained in the scheme all but one being involved right from the start.  Thankfully the farmer supporters providing land for the sowing of bird food crops have continued their involvement throughout.

In 2010, due to limited available free time within the active volunteers of Rhayader by Nature, it was decided that the project should continue with just the core few garden-bird stations and farmer/land owner bird-food crop plots rather than try to bring back to life the original scheme.  So, since the end of 2010 the project has concentrated on the collection of bird counts at just three feeding stations, those with regular populations of yellowhammers and reed buntings, and the continuation of bird-food crop sowing at five farms.

It was hoped from the start that in the agricultural scene the bird food crops would encourage the small-scale growing of potatoes alongside the sown bird-food crops.  Such rotational cultivation with little or no use of herbicides promotes the growth of arable weeds notably fat-hen and redshank which provide good winter seed food for small passerine birds especially tree sparrows, skylarks, linnets and other finches.  Three farmers within the scheme have indeed grown potatoes as a result, one selling bags of potatoes at the farm gate.  If voluntary time permitted this part of the original scheme could, if taken up on a large enough scale, markedly benefit farmland birds.  The original scoping paper envisaged promoting a local business cooperative of small scale potato (and other vegetable) growers selling locally grown branded Yellowhammer potatoes/vegetables harvested and sold by a local group of young people to help small-farm family incomes.

Now in 2013, the project continues as in 2010.  Its future is a little uncertain but the consensus within Rhayader by Nature Local Natural History Society is that we should continue with the farm bird-food plots, and try to add to them, and carry on collecting counts of bird use of those plots and of yellowhammers and reed buntings frequenting the main three feeding stations.  In addition we hope to find time to revisit the yellowhammer breeding sites found in the early part of the project to reassess the population.  A visit by Steve Jones during 2012 to the northwestern flanks of Trembyd, a favoured breeding area found an increase in territorial pairs from four in 2004 to six.  This site is close to a feeding station that in recent years has attracted 4-18 yellowhammers almost daily and suggests that our efforts to date have not been in vain. 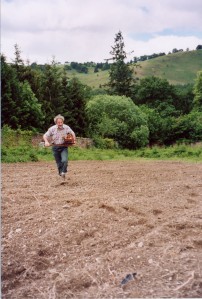 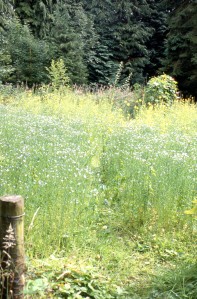 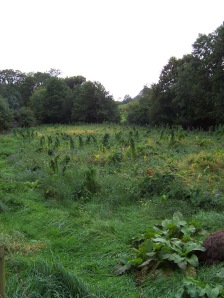